How to Connect with Professors Before 1L Year 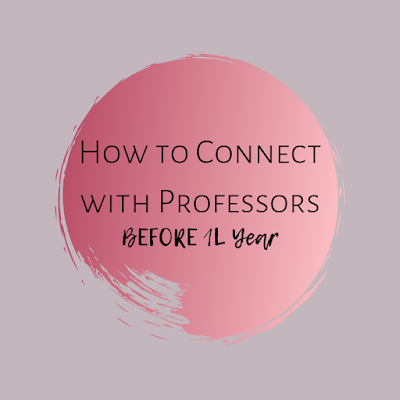 So back in March I got my first lesson in how important networking is in law. I have a friend how is a rising 2L right now and so I was going to him a lot for advice when I was applying to law school. He was basically my life preserver throughout this whole process and our friendship opened doors for me that were there, but I might not have opened myself. I ended up applying to the law school he is currently attending and in the end I decided it will be my home for the next three years too. But, during the decision process I had a lot of questions and issues that almost kept me from going.

First, and most important, was navigating in-instate tuition after living out of the state for about 8 months. At first I thought this was a no brainer and that I would definitely get instate tuition. I was born and raised, went to all levels of schooling including my undergrad, in the same state so when I got coded as an out-of-state resident it was shocking and worried me a lot. I shared all of these concerns with my friend and he immediately reached out to one of his IP professors who is the head of IP at the Law School. Turns out, because I said I was interested in IP on my application I had gotten one of those generic welcome emails from the professor already, inviting me to the law school and to reach out if I needed anything. Being 100% honest here - there is no way I would have reached out to him about this issue on my own.

When my friend asked if he could email the Professor and copy me on it though I just thought sure why not. The next day, I had a phone conference set up to talk with him about IP and my tuition debacle. This was a turning point for me in my law school decision process. We talked on the phone for about 30 min and he gave me a full run down of their IP Center and was really candid when we talked tuition. He completely understood my concerns, but also gave me a little reassurance as to the amount of student loans I would be able to afford as a patent attorney. Obviously, none of it could be guaranteed, but it was his field and he worked in it for many years and has watched many law students accept job offers so he is definitely knowledgeable when it comes to potential salary.

Immediately after the phone call, I called my mom and told her I didn't care about out-of-state tuition I was going there no matter what. Now, just to put this into perspective, there was a $35,000 difference in TUITION at this point, not even including living costs, between my first choice and second choice school. Learning how involved and supportive the professors are at my first choice school was worth literally tens of thousands of dollars to me. The day after our phone call the professor emailed the admissions office (I had already sent my negotiating email) to see if he could find any more information and make sure they knew that I was a valuable student who they really wanted to attend next fall.

This meant the world to me. There are so many big life decisions to be made in law school and knowing that I could lean on my professors and ask for guidance when I hadn't even committed to their school yet was huge. I kept him up-to-date on my situation the whole time and met with him when I visited. I am really excited to already have a connection with one of my professors and this experience has definitely given me the confidence I need to reach out to other professors once I actually start school in the fall.

In the beginning, I was very intimidated because I felt like I didn't have enough of the "right" questions to ask him. I left like I didn't know enough about my future as a lawyer to know what I should be asking now. I learned that it really doesn't matter. Even if you have one question, start there and I promise you will think of more. Your professors will definitely want to talk about their work and how they are involved in the school and that brought up some questions for me. In the end, when you run out of questions that is fine. You will have made a good impression by taking the initiative to reach out!

Networking is a whole new exhausting world for me. I've learned that there is no connection too distant or small! Don't be so afraid of reaching out that you miss out on an opportunity, and don't be too proud that you won't accept help. Even though there is a stigma about law students being competitive and cut throat, so far I have had the complete opposite experience. Here's to hoping I meet many more wonderful helpful people over the next year and that I can be one of those people for my colleagues as well!