LSAT on a Budget - Self Study to Success 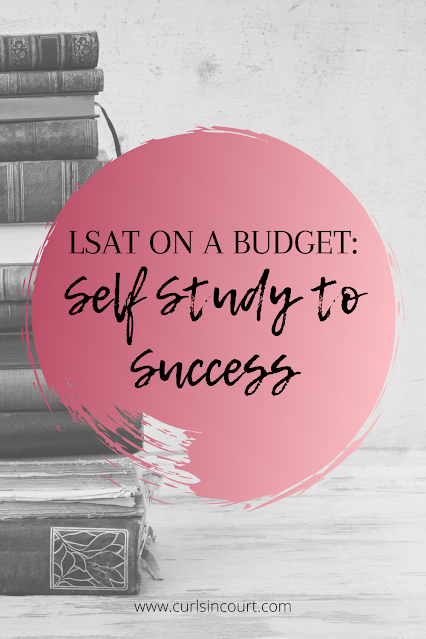 Surprisingly there are a lot of people out there who really support taking LSAT prep classes, but I am not one of them. It's not because I don't think they are helpful, but because I think you can teach yourself just as effectively.

If you are planning on going to a top 5 law school then okay, maybe I get spending tons of money on this, but for the most part I think you can self teach success on the LSAT just as well.

It's a big scary exam that has been hyped up for so long people worry about it before ever learning what it's about. I think that contributes a lot to people's eagerness to sign up for expensive classes. If if's THAT hard, then how can you teach yourself? At the end of the day the LSAT boils down to one thing though - logic.

That's it. They disguise it in word problems and dress it up in paragraphs, but logic is logic. Looking at the LSAT for what it is and not all the scary stories and failures you have heard about is half of being successful. Whether it's Logic Games, Logic Reasoning, or yes, even Reading Comprehension, understanding basic logic and how it is used in written word on the exam is the first step to success.

Okay, so now that we can see the LSAT for what it is how do we conquer it? First, take a practice exam, take it seriously, and if you fail it miserably DON'T WORRY ABOUT IT. Next, as I have mentioned previously, I think one of the keys to success is making sure you understand all the key concepts surrounding logic.

Disclaimer here - my undergraduate education relied heavily on the key concepts of logic and logical reasoning, so this is a subject I felt comfortable with from the start. I only let you know that because I do think it is a reason that I felt less intimidated by the LSAT than some people. I don't believe that your background in logic up to this point is a determining factor in your ability to understand logic though.

Even though I felt comfortable with these concepts, I still reviewed them and how they are used in the LSAT. Even if you are a newbie to deep diving in logic you will be able to make comparisons to times you used logic in other disciplines or classes without even realizing or specifically discussing the fact that you were using logical reasoning. This will build your confidence and slowly this test won't feel as intimidating as it did in the beginning.

To review/learn these concepts I recommend using the Kaplan study book (linked in case you want to use it too). I went to my local library (HIGHLY RECOMMEND - this way you don't even have to buy the book and you are in a great, low distraction study space) and used it each night for about two weeks to study each of the three sections of the test and the logic behind them. I didn't take and practice tests in this time, but I took notes and did every practice exercise in the book - even when some of them felt redundant or easy.

After you feel you know everything there is to know about logic try some (lots of) practice exams.  Use these books, again I didn't spend money on these because I borrowed them, but I 100% support shelling out the money for these if you can't borrow/rent them for free.

Pick a single section and take the test. Pay careful attention to your time - I got nervous my first LSAT and bombed a section because I didn't pay attention to time *tears*. After you take the test grade yourself and if you are doing a logic games section, head to 7sage (the holy grail of LSAT logic games YouTube).

When it comes to logic games 7sage is the best free resource out there and they help make it totally possible to get a 100% on the logic games section.

For the other two sections - be critical of your assessment after you see which questions you got wrong. Don't just say "Oh that's the right answer, DUH" search for why that answer is right and look for patterns in each new similar section.

Give yourself lots of time to study - I'd say at least 2-3 months. Try to pick a time when you aren't too busy (during the summer or a light semester). Studying for the LSAT is a marathon not a sprint. Be careful with yourself and watch out for burn out. I was so dedicated to studying at first (I did follow the plan above) and then about 3 weeks before the exam I just got distracted with work and life. I didn't put the time in I should have. Allow yourself to take breaks when needed...take a few days or a weekend off and come back recharged.

If you decide that LSAT prep courses are what you need then take full advantage of them and the resources they provide, but if you decide they aren't then don't let any one make you feel like you can't be successful without them!

Have any tips and tricks for conquering the LSAT on your own? Share them below.