How to: Make Your Case Briefs Work for Class 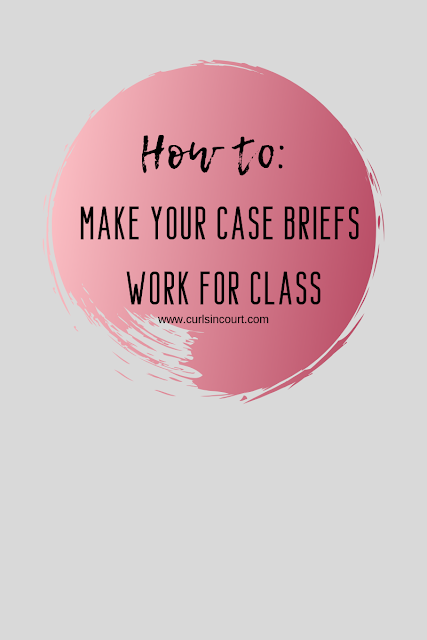 So, here we are at the end of my 5th week of law school…eek!

I've learned a lot so far, and learned that I still need to learn A LOT.

One of the things I have actually managed to grasp is that all your briefs will be different for each class. Here are some helpful tips I have found for a few of my classes that may be helpful for yours too.

If you want to see a detailed explanation check out this post!

For instance, in the beginning of contracts most of our cases were about a breach of contract and then establishing if there even was an agreement. To help us understand this, my professor would ask us what each party wanted (damages, specific performance, ect.)

Now, we have moved onto consideration and instead of figuring out what each party explicitly wants, we are looking more at if there was a promise, if so what, and further if there was consideration to support alleged promises. Each party has promises so we map these out because sometimes even the court gets confused on whose promise they are talking about in the moment.

Civ Pro is a whole different beast. My briefs for this class are a pretty different, and I suspect they will keep changing as we go on.

In civ pro you really have to be able to distinguish what brought the parties to court (background) and then the procedural rules that are in question.

Here my facts has become background. I decided to change my language because I think facts implies more importance than background. Here was facts matter so that you can orient yourself in the law and draw out the elements of the cause of action, but what matters most for understanding the rule is the procedural history.

My procedural history section is usually pretty detailed so I can map out what is going on and what issue is being debated.

My professor suggested that unlike my other classes the cases in civ pro are more illustrations, so sometimes what is going on in the case matters very little. It is most important to understand the rule and procedural history rather than the exact details of the case.

Torts honestly doesn't vary much from the basic outline I made above.

Basically, just don't be afraid to mix it up for what works for you. One of the most amazing things about 1L year is that is universal. Every lawyer in the U.S. learns the case subjects, reads the same cases, and gets through the same crazy material. While the subjects are universal, and the teaching styles for the most part, the individual study habits aren't. There are countless ways to learn the law. Figure out the way that works best for you, and if it stops working then switch it up!


How is law school going so far? Let me know!
Check out my latest post on writing a CREAC here.